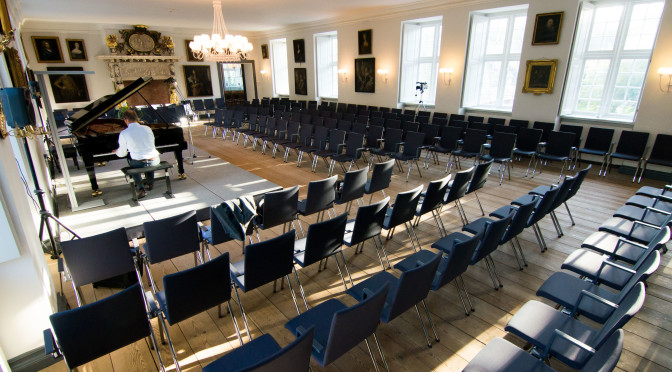 Even during JS Bach’s time it was considered a challenge to produce a cantabile on an instrument that does not naturally “sing”, such as a keyboard instrument. In the accompanying notes to his “Inventions and Sinfonias” of 1723, Bach explains that his intention with these pieces had been to produce an “honest manual” to teach “enthusiasts and especially those keen to learn” the correct way of playing in two and three parts, and particularly to impart “the cantabile style of playing”.

A good century later – now moving on to the piano proper with pedals – the title of “Songs without words”, inaugurated by Felix Mendelssohn and used for several of his sets of piano pieces, conceded to the piano the ability to “sing” without the presence of a singer, to perform songs independently. The pianist Sigismund Thalberg (1812-1871) made it his task to perfect this skill: in 1853 he published his instructive “L’art du chant appliqué au piano” [The art of singing on the piano], Op. 70, containing twenty-four transcriptions of arias and songs by composers such as Mozart, Beethoven, Schubert, Rossini and Bellini. During the course of the twentieth century, however, this ideal of striving for vocal qualities on the piano faded from the spotlight, prompting Vladimir Horowitz – who did not hold the performance culture and general musicianship of younger pianists, whom he heard later in life, in particularly high esteem – to summarise his disapproval with the words “They are not singing”.

For Franz Liszt, who explored all directions of sound production on the piano, it seemed natural to accept the creative challenge of arranging songs for the piano: he produced over fifty transcriptions of Schubert songs alone. In these, he not only sought to integrate the vocal line into the original accompaniment, but also to emphasise the poetic image with musical means.

Some piano transcriptions of songs improved the originals to such an extent that they have become much better known than the songs (as is the case with “The Lark” by Glinka-Balakirev). The remarkable acceptance of this genre by composers themselves is underlined by their own song transcriptions – as is illustrated by the example of Edvard Grieg. On the other hand, Max Reger’s arrangements of twelve selected Richard Strauss songs for solo piano (1899) are virtually unknown: the original songs are too firmly rooted in concert life and in the repertoire of singers. However, hearing them (for instance “Ich trage meine Minne”) in the expert hands of a pianist such as Frédéric Meinders can be as deeply touching as hearing the original version for voice. Reger did not include Richard Strauss’ famous “Ständchen” – which is pianistically striking as the accompaniment features rousing semiquavers – in his collection: Leopold Godowsky, Walter Gieseking and Wilhelm Backhaus later made up for this omission with their own impressive arrangements.

Earl Wild (1915-2010) must be mentioned as one of the “creative transcribers” (Sorabji) of the twentieth century: the American pianist not only ingeniously adapted Gershwin’s music for the piano, but also arranged twelve songs by Rachmaninov for solo piano which he recorded in 1982.

Another very fertile pianist-composer who has dedicated himself to the art of transcription is the Dutch artist Frédéric Meinders. He has produced such convincingly independent piano arrangements that singers – according to certain pianophile and somewhat malicious voices – have become superfluous…